Solange’s AKA ” Beyonce’s little sister ” A Seat At The Table, album has created a buzz since it’s release a few weeks ago. Over the last two weeks, the album and its accompanying videos for “Cranes in the Sky” and “Don’t Touch My Hair” have been lauded for their meticulous, purposeful construction, with press outlets tracking down the contributors behind each of its moving parts to talk about their role in the process.

Speaking on press,The New York Times published an interview with Shiona Turini, the “fashion collaborator” responsible for helping Solange bring some of the iconic looks from “Cranes” and “Don’t Touch My Hair” to life.
The piece introduces Ms. Turini—who spent time working at Yves Saint Laurent, W, and Teen Vogue, before styling Solange for events starting in 2014—and offers some insight into the visual inspiration behind the videos’ styling choices: “When it was time to style the videos …,” writes the Times’ Joanna Nikas, “Ms. Turini and the singer looked at mood boards with images of Cam’ron, Lil’ Kim, Diana Ross, Lynette Yiadom-Boakye paintings and more, then sourced looks from designers like The Row, Rosie Assoulin, Phlemuns, Acne Studios, Brother Vellies and students from Central Saint Martins in London.”

In the interview, Turini speaks on the overall process of getting involved in the project and the intentionality behind Solange’s aesthetic choices: “First, I listened to the music, which was very special and very moving. Then Solange sat down with me and started to tell me how she wanted the visuals to look. It was really important for her that the visuals made black women and men look regal and majestic… 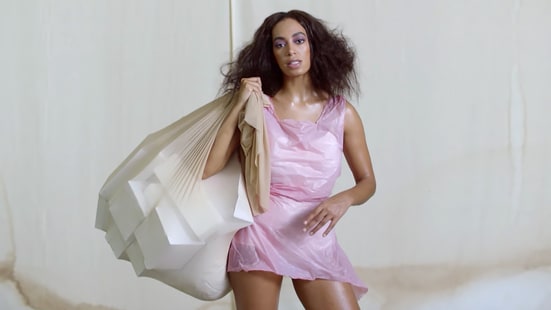 She had worked with Carlota Guerrero, the video’s art director, and they knew the color palette. Solange is known for prints, bright colors and color blocking, but she’s definitely evolved and is embracing these nudes and muted colors and this softness.” She reiterates those same goals, of creating images of black strength and regality, in sourcing the looks for “Don’t Touch My Hair”: “So we asked, “What are these iconic images in our culture?” And it’s Sean John velour tracksuits, do-rags and fur and finger waves. I don’t know if people know how hard it is to find Akademiks velour tracksuits in 2016. I had to buy some off a website from China and reach out to the brand and find some off Amazon. And then the blue pleated outfits, which were Solange’s reference to church choirs. In our black churches, the women are very pulled together. Their robes are very regal. But this is kind of the unexpected fashion twist to this.”  Read the full interview via The New York Times!

GET THE PARTY STARTED

Check out this Cover editorial feature,  spotlighting the fabulous Kendall Hall, Creative Directed and Styled by Le’TiciaF.  This editorial was photographed by up & coming Photographer Brittani

With the first installation of The Model Diversity Project

DRAKE In My Feelings

By now we know you guys have heard about

Have you seen the new

With the first installation of